January 23, 2014
Since I am a woman I am going to talk to you woman and young girls even 13, 14, and 15 years old who have already adapted a lifestyle of drinking hard liqeour, beer, wine coolers. I was there I took my first drink at 13 and that was some Jack Daniel's I thought i was something when I spiced my soda with some of that drinking like it was nothing.

Well, life went on mine went to las vegas which i didn't drink then for some reason i just stopped for a season. Then i got divorced and moved to austin and after some disappointments and a alcoholic roomie i decided to dive into that. She taught me how to drink and I did. I ended up passing out in a house with people i didn't know and a guy who was there as i threw my guts up, I could have been raped or even killed and would've been too drunk to even care.

This became a lifestyle of dealing with disappointment that led to drugs, which led to attempt of suicide, prostitution, homelessness, and yes rape. Don't think just a little drinking habit want lead to this or worse for you too because it has to many a good girls and woman and it can for you too. 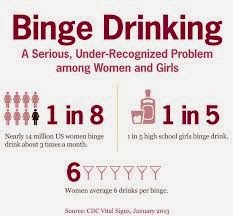 Their's a happy ending to my story but their's none when it comes to drinking. Today I am a writer, a teacher, a mom and wife and free from alcohol and drug use thanks to my Savior Jesus Christ. Find out more: www.KimFincher.org

God Bless and Be Safe!