The World and the Word of God 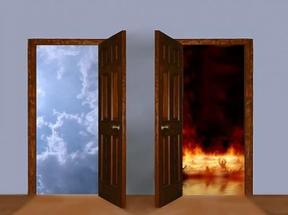 The War between the World and the Word of God:
Today we celebrate Jesus dying on the cross for our sins and defeating hell. He spends a day down there preaching to the prisoners in sheol and when He goes to heaven he leaves us an important instruction: wait for the Holy Spirit and then Go into all the world preaching the Good News-the Gospel message that Jesus saves.
It’s a war going on closer to home than you might imagine. The war is between the world and the word of God. Which side are you on? Who is fighting in this war? This war is being fought between unbelievers; also known as the lost and their head commander is satan-the devil; and believers of Christ Jesus and the word of God or Christians and their leader is God and their guidebook is the Holy Bible.
In the world people worship many “gods” also known as idles. Examples are money, success, fame, wealth, intellectual success or achievement, physical success of one’s body, and are devoted to many past-times which involve self-indulgence and entertainment. Believers are devoted to Christ and the word of God. They have overcome the world and its lustful temptations. They are not prideful or self-sufficient but instead rely on God’s will and plan each day of their lives.
Now there’s an invisible scale between people of the world and believers. At one end is someone completely “on-fire” for God and totally committed to their faith in Christ and from there we have luke-warm Christians who are neither hot or cold, they just want to blend in and then theirs those who are completely cold, they have lost their fire, their faith and even though they believe they are just as useful to God as unbelievers and more useful to satan because of their lack of faith to do anything for the kingdom of God or stand up for their faith in Christ.
So where do you see yourself at on this scale? Here is an example to help you evaluate where you are and where you’d like to be.
Worldly values vs. Christian virtues:
The people of the world value possessions, stuff, games, books, and music that are not witnessing about God or in any way praising the Lord, but are the opposite of what is written in the bible about what is lasting spiritually. Christian virtues are faith, hope and love. This is the foundation of our belief. We find faith in God, hope in Christ and love through a changed heart through the Holy Spirit. The games, books and music that we play, read and listen to reflect who we are in Christ.
Let’s look at some text from 1 Corinthians on the World’s Wisdom and God’s Wisdom:
Vs. 18. “The message of the cross is foolish to those who are headed for destruction! But we who are being saved know it is the very power of God.”vs. 21 “Since God in his wisdom saw to it that the world would never know him through human wisdom, he has used our foolish preaching to save those who believe.” Vs. 27 “Instead, God chose things the world considers foolish in order to shame those who think they are wise. And he chose things that are powerless to shame those who are powerful.
We are going to be seen as foolish to non-Christians, are family members who haven't confessed Jesus Christ as their Lord and Saviour or those who say they are Christian and believe but they are luke warm, do not belong to a church body, aren't following God's calling or even know the Holy Spirit, they pray but show no fruit of their faith and they fit in  with everyone else who doesn't believe, cussing, drinking, partying, smoking, lying on occasion, lusting in the flesh, they have no foundation so will easily slip and fall with no support of Brothers and Sisters in Christ as their accountability is only to themselves. A true believer and follower of Christ-Disciple will fall but have support immediately available in their church body to pull them up, pray for them, with them, allow them to confess their sins out loud, and begin the healing process. Do not deny the power of the Church Body it's the refreshing center for fighters of the faith, it's the medics ward, the emergency room, and the resting ground. Our body must be strong for believers as a whole to be strong in the war between the world and the word. That's why defending our faith also known as apologetics is so vital and important. That's why devotion to studying the Word and praying and confessing the Word is so important as it becomes our hearts armor.
Facebook Pages:
Words of Encouragement
Fincher Family Ministry

have a blessed day, in Christs love and service,