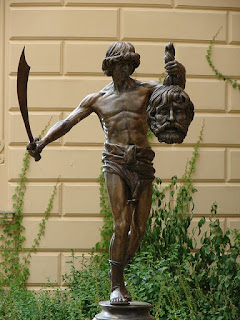 Do you know the story about David and Goliath?
It's found in 1 Samuel 17 if you need a refresher
Goliath was a giant and he challenged the army of the phillistines
nobody would fight him all they seen was his physical strength but David
seen a man disrespecting God's army and David knew God was bigger than this giant
So David said he would fight Goliath and because of David's faith in God,
He wasn't afraid of the physical limitations he had against the giant,
he didn't think of the odds being against him, in fact
he didn't even wear the typical armor or carry any weapon besides
his slingshot and God delivered the giant to David with a smooth rock.

I share this story with you this morning because my son who happens to be named David actually started a conversation with me of this story and as my husband has been working all the time and I'm sad, depressed, and frustrated that I never get to see him I thought my husband has the faith of David to defeat the giant-debt and God's given him the ability to work a 2nd job why should I fear and get in his way and so i've decided today to get out of the way and stop demanding date nights, and stop nagging him for working an extra hour or two in fact i'm going to insist he works as much as he possibly can because we are going to defeat that giant debt and the victory of freedom will be ours!

What giant is defeating you today? Are you standing up to it and ready to fight for freedom?
What steps can you take today to defeat the giant in your life?
Remember the victory is ours says the Lord! and the devil has already been defeated and in the end the ultimate victory is the Lord's.
How will you put God first and walk in victory today?

I am going to continue watching youtube videos of people who are defeating that giant of debt here are a few channels i want to share with you they are following the DaveRamsey Program which is what we are also doing to get out of debt.
ImperfectMommyChaos
GazelleinTents
DaveRamseyChannel

here's another channel that i get encouragement from because im thinking i admire her but i could never do that.  TheEncouragingHomeschoolMom

Here's one I like on saving money on groceries:
MomNeedsAClone